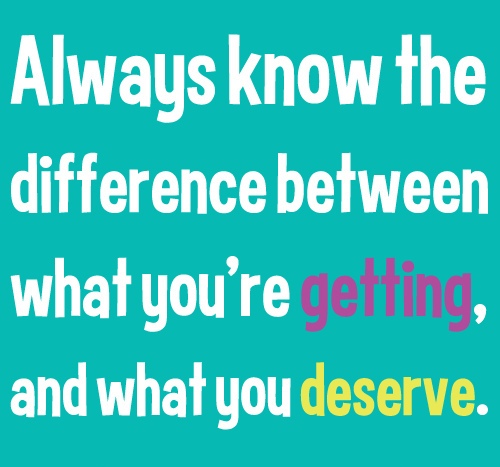 Why are you settling when you know you deserve better. Don’t be so easily disposable. Don’t be just an option for someone; Be the priority. Rise above what you think you deserve into what you know you deserve. Quit settling, wasting, and investing time into someone or something you think will be worth it; Invest in someone or something that you know will. So, how will you know for sure that he/she is worth it? You won’t. Let him/her chase you for a change. You know what you’re capable of doing. You’re able to show this person how much you care, how much you want him/her around, and how much he/she means to you. We all know that you can do that but it’s time to let him/her do the same. If he/she can’t do that then clearly you’re just wasting your time.
There are two types of people: Those who care enough and those who could care less. Those who care, people like us, will do almost anything for someone or something that matters to us. Those who could care less, on the other hand, won’t give a shit if you go out of your way for someone or something; Maybe they’ll notice for a brief second but then it’ll just become an after thought. Know when to care enough. Enough is the key word.
Quit stressing and always putting yourself on the line. It’s so damn tiring. Quit seeking what you think you’re looking for and have found. It may be, but give the other half a chance to discover the same thing. Anything worth it with someone is mutual so quit doing all the work. Chase him/her if you want but know when to draw the line. Let him/her show you that you are just as important, if not more, to him/her.
Know when it’s time to throw in the towel. Don’t bring yourself to the absolute edge. Stop when you have the tiniest gut feeling of doubting him/her, or more importantly, yourself. You know what you feel. You know your limits. You know what you deserve. Let go when your mind is a mess and your heart is about to fall out of your chest. And I mean this in the negative sense. If something is meant to be it will work out, as cliche as it sounds. But it’s true. Don’t wear yourself out. Focus on you. Do your part, as mentioned, by going halfway. If a person feels the same way, all of that will be reciprocated and make its way back to you.
We have to learn how to be greedy about what we want and need in our life but it’s doing it in a way that we aren’t overworking and stressing ourselves out. It starts to hurt when you’re not being reciprocated in the same way. When it starts to hurt, back away or leave before it starts to consume you further. No one has the right to make you stay. So, take the opportunity to walk out before someone walks out on you. When you look back you’ll be happy because you’ll have found something or someone better; Or, if you’ve already found the best, it’ll give someone or something the chance to find its way back to you. If none of those happen, well que sera sera. Move the fuck on. It definitely was not meant to be. If you truly are a priority to someone, he/she will come after you. Believe that.
With that said, know how to play both sides. (And by play, I don’t mean this entire thing as a game.) You know what you deserve and I’ve spent time explaining that. At the same time, if it’s your turn to meet someone or something halfway, do it. If you feel the same way, show it. Actions speak louder than words. No one relies on what you say anymore. It’s what you do. On the contrary, if you don’t feel the same, have the decency to voice that. Don’t linger around to the point that you’re being unfair to the other person. After all, we hate being in that position.
All of this is easier said than done. I’ve always been on one side of the fence: the one chasing what she thinks she wants and what she thinks she deserves. No. Now I know what I deserve and anything that I’ve had in the past was something that I cared deeply for but never cared enough for me. I’m learning to pull away, giving the other side the chance to prove that I’m worth something. I think that when you learn to play both sides, you’ll get to learn yourself more and that’s when you’ll know what you truly want and deserve.
So, stop wasting your time on something that is temporary, especially if you know it is. You’ll start to block out anything that’s better for you and is meant for you. Don’t be afraid to let go of something no matter how much you care about it. I think it hurts a million times more trying to make something work or go a certain way when it wasn’t meant to be. Learning to walk away and when to walk away might be the hardest thing you’ll have to do but may also be the best decision you’ll make. Know what you deserve. Know your worth. Never settle because you deserve better.