Life’s Tragedy is that We get Old Too Soon and Wise Too Late. 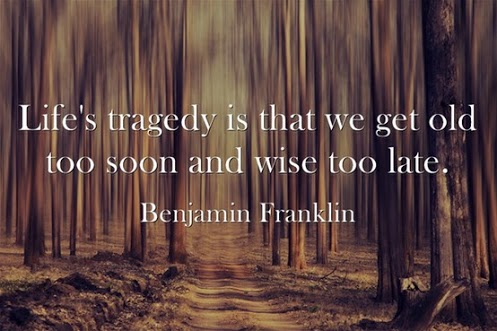 Life’s Tragedy is that We get Old Too Soon and Wise Too Late.


Meaning  of  this  Quote :
To me, it is all too true a statement. We get old faster than we get wise. If only we could become wise sooner and old later. The Tragedy, as Ben puts it, is that for the vast majority of us, age comes before wisdom.
To add to the tragedy, getting old is mandatory (to a certain extent, you can work to be healthy and active, but still…), however wisdom is always optional. There are a great number of aged fools out there, just turn on the TV and you’re bound to see one before the evening is over.
This quote also has a hidden statement, urging us to become wiser at a younger age, and in so doing, ease “Life’s Tragedy.”
Why is wisdom important ?
Just think back on your life. How many things can you come up with that you would n’t have done if only you had wisdom to know better?
The trick is that in most cases, the result of trying something stupid is the genesis of the wisdom. Kind of a chicken & egg  style problem, is n’t it?
Wisdom comes from learning from your mistakes. But it takes years and years to make enough mistakes (and learn the appropriate lessons from them) to become wise.
So the trick is how to get ahead of the curve on wisdom. I’ll leave the “how to get behind on the aging curve” to someone more informed in the healthy lifestyle.
Where can I apply this in my life?
The challenge in beating “Life’s Tragedy” is to gain wisdom more rapidly than would normally be done by trial and error. This concept is not new, and has been dealt with by many over the course of human history.

“By three methods we may learn wisdom: First, by reflection, which is noblest; Second, by imitation, which is easiest; and third by experience, which is the bitterest.” – Confucius

Most of us learn by the third method, the path of Experience. It is not only the bitterest, but the slowest. We might have to make the same mistake a dozen times before we stumble on the correct method, and thereby gain wisdom. It also only works if we stick with a problem long enough to get a favorable result.
Otherwise, we’re like Thomas Edison. He once said “I have not failed. I’ve just found 10,000 ways that won’t work.” I don’t know about you, but I doubt I would have the endurance to do something that many times without giving up.
So much for the path of Experience. It’s functional, but slow, bitter and painful. That leaves us with the paths of Reflection and Imitation as methods to get a head start on wisdom.
The path of Reflection is not the best path for the young, but begins being useful in middle age. Reflection requires the mind to deduce the proper course without actually doing the thing under consideration. This requires a store of knowledge that most of the younger people don’t have.
That said, a younger person could use Reflection to determine the best route down a mountain on a snow board if you were a good snow skier. But it might not work as well if the only skiing you ever did was water skiing.
There are other, more philosophical tasks the Reflection lends itself to, but that also requires a fairly broad base of reading and some experience to be able to do much simply by reflection. That still points past youth towards middle age. I hope that makes sense.
That leaves us with the path of Imitation. This can be anything from watching over the shoulder of a great chess player, to reading books by great chess players, to finding a great chess player to be a coach and work directly with you.
The path of Imitation is the best option for younger people, and it starts shortly after birth. Learning to feed, walk and talk all are done primarily by imitation. Unfortunately for most of us, sometime in our school years, we cut back on imitation and start going on our own (the path of Experience). By middle age, seem to think we are too sophisticated to imitate, unless it is with a trainer or from a book – at least for most of us.
We need to drop our inhibitions and get out there! Ask questions. Work out the answers. Make it your own by repetition. Do it sooner rather than later. The only thing sadder than looking a fool (by asking questions) is actually being one.